Today we black out Photoshop to protest the time people waste doing Save for Web.

Here’s how you can help:

Which of the following topics do you want covered in Ep 05? Let me know in the comments!

If you’re like me, you spend a lot of time working on your images in Photoshop.

Let’s say a new questionable law has appeared and you want to send a message to your visitors:

So you make the change, and then go:

…and then maybe you have to refresh your browser on top of that.

(You really need to see the video if you want to appreciate how nice that can be.)

This is possible with a piece of old German equipment called Enigma. (It’s also an app that adds one-click image exporting options to Photoshop.)

Let me walk you through my settings:

When you click the “Visible Canvas” button, the visible layers are saved into a file in the output folder with the same name as the PSD file.

Alternatively, if you have separate layers for separate images, you can click the “Selected Layers” button to export a file with the same name as the layer.

Now, this is WorkflowThu, so we cannot simply leave it at that, can we?

2. The shenanigans of old hardware

There are actually several problems with this workflow that require additional tools to solve.

The first problem is that Enigma does not support hotkeys. When I’m working on something, I really don’t want to move my mouse to click the button, because I might be adjusting a setting somewhere and I want to continue doing that while previewing the results.

The second one is that Enigma never overwrites files. So if you configure it to output into your actual images folder, it won’t overwrite them, it will simply create additional files with numeric suffixes.

And the third issue is pushing the changes into your browser window, but we all know how this is going to be solved (hint hint).

3. Today we fight back

(This part is going to be Mac-only. On Windows, there’s Sikuli that can do all these tricks, but it’s not nearly as user-friendly, and there are some crazily expensive tools for automated testing, but I haven’t been able to find a good solution for a regular user. Let me know in the comments if you know any.)

Here’s the magic part: set “relative to the found image’s center”, then make a screenshot of the “Visible Canvas” button of Enigma, and drag the screenshot into the macro action’s image well:

(Btw I have the Desktop folder as a stack on my Dock, really helps to get to the screenshots faster.)

There is a problem, though: after you click the Enigma button (or run our macro), the keyboard focus moves into the Enigma window, and many Photoshop shortcuts (the ones without modifier keys: 1..9, Shift-1..Shift-9, tool selection keys) stop working until you click one of the native Photoshop windows.

We can extend the macro to perform that second click for us too. A safe place to click on is, say, somewhere on the toolbar of the layers view.

Done! Pressing F6 now runs the export, and the Photoshop hotkeys still work after that. Nice.

You can enable Display checkboxes in the macro editor to see the winning match (green) and other potential matches (orange):

You may want to drag the fuzziness sliders all the way to the left so that there is no risk of unwanted matches:

Are you already thinking about all sorts of ways you can automate stuff using this app?

So how about the file names issue?

Well, Enigma is set up to put the files into a separate ‘exported’ folder, and we’ll use another tool to move them into the images folder, overwriting the existing files. In the example, we need to move images from ‘exported’ into ‘img/examples’:

I’m going to show two different ways to move the files: the first one uses LiveReload, and the second one involves an app called Hazel.

We’ll now set up LiveReload to push image changes to the browser, and also to move the files:

First, drag the entire folder into LiveReload. (This is actually all the configuration we need to do to push the changes into the browser.)

Second, let’s add a post-processing command to move all files from the “exported” folder into the images folder: mv exported/* img/examples/: 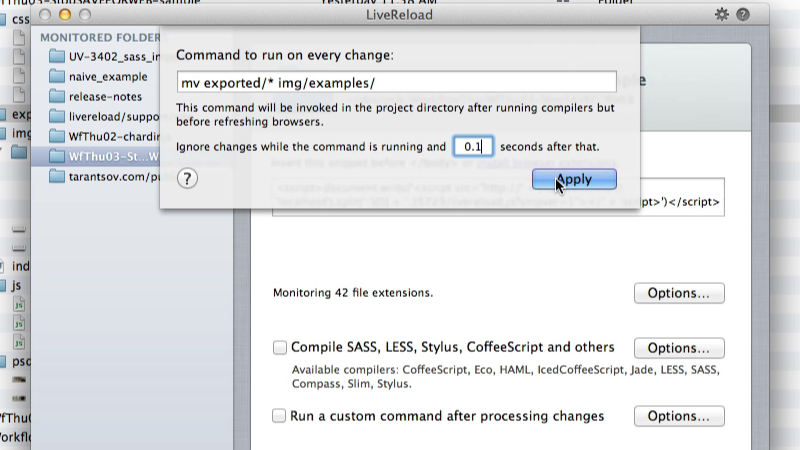 Third, open our site in the web browser and enable the extension:

Note that because I’m working with local files, I need to have “Allow access to file URLs” enabled on the Chrome Extensions page; Safari does not provide a similar option at all.

And everything should work now!

Switch to the Photoshop, change something, hit F6, boom.

Isn’t it just awesome? I think it is.

If you do not want to use LiveReload, or find that figuring out a right post-processing command is too complicated for your needs, there’s an app called Hazel.

Hazel is actually my first choice for any automated file manipulations. It’s a Mac app that monitors a given set of folders and does stuff based on a set of rules. There’s also a similar free Windows app called Belvedere. Hazel has a huge following, and is literally the difference between a clutterred and a clean Mac. I use it to clean up my Downloads, Desktop and Trash folders and to highlight the apps I haven’t used for a while.

Let’s add the “exported” folder to Hazel and create a new rule to “move all images to destinations”. Set it to match all files, and move them into the images folder with overwriting enabled: 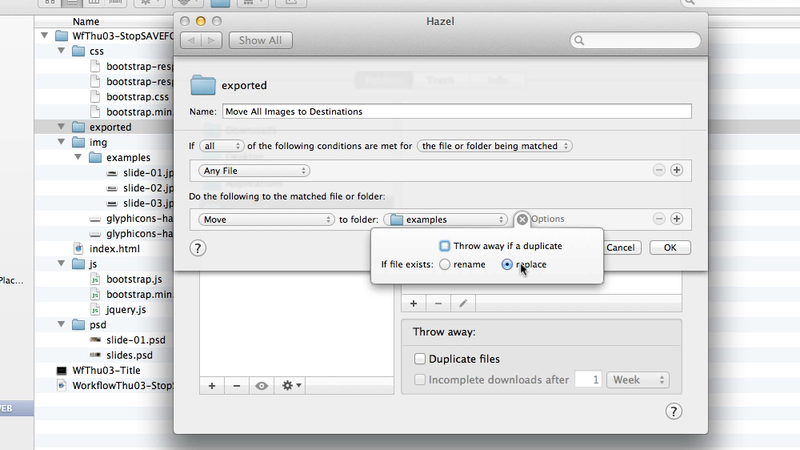 That’s it. As soon as a file appears in the “exported” folder, Hazel will notice it and move into “img/examples”.

There is a couple of seconds of delay, though, because Hazel does not process the changes immediately. This is the downside of the approach; on the other hand, you can easily set up very complicated rules in Hazel which could get tricky to do in LiveReload.

The next time we’ll dig into what makes Sublime Text great. 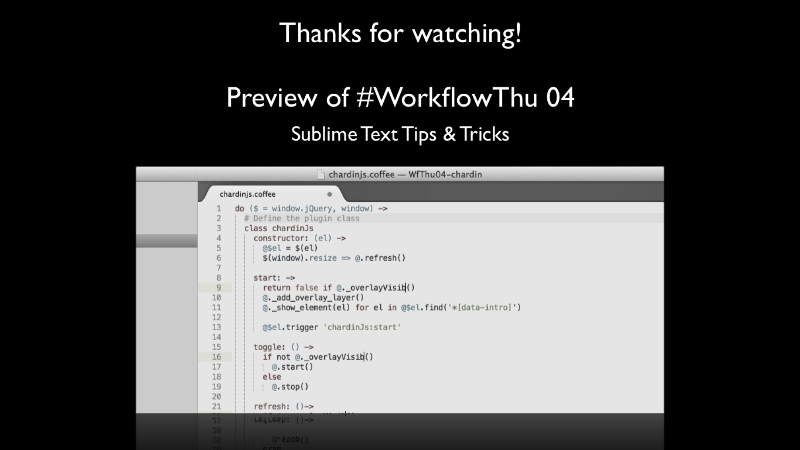 Which of the following topics do you want covered in Ep 05? Let me know in the comments!