Hello, and welcome back to the rebooted #WorkflowThu series.

Today we’re going to see how ridiculously easy it is to debug CoffeeScript files with source maps. Watch the video (07:14) or read the article below.

Tools mentioned in this video:

Subscribe to #WorkflowThu if you don’t want to miss future screencasts.

Let’s start with a copy of chardin.js, a neat library for adding simple overlay instructions to your apps: 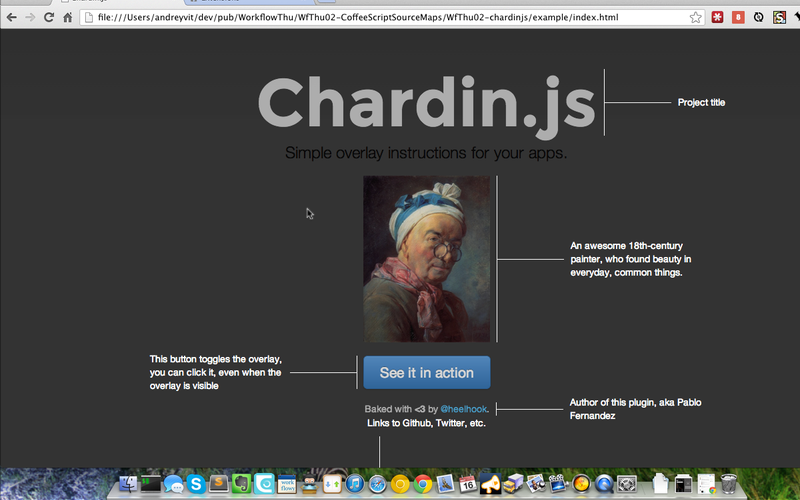 It’s written in CoffeeScript. If we open the developer tools, we will only see the compiled JavaScript, of course. While it’s readable, it’s still a mess: the line numbers don’t match, some constructs are less than obvious, and so on.

Thankfully, now we have a tool to deal with that, at least in Google Chrome. Let me show you how.

We need to change CoffeeScript compiler options to generate a source map. I’ll be using LiveReload here because, you know, I’ve made it, and also because it’s a very simple app. But pretty much every similar tool will support source maps soon.

Let’s go to Compiler Options in LiveReload and enable “Generate source map”. (If you were using CoffeeScript on the command line, you would simply pass --map.) 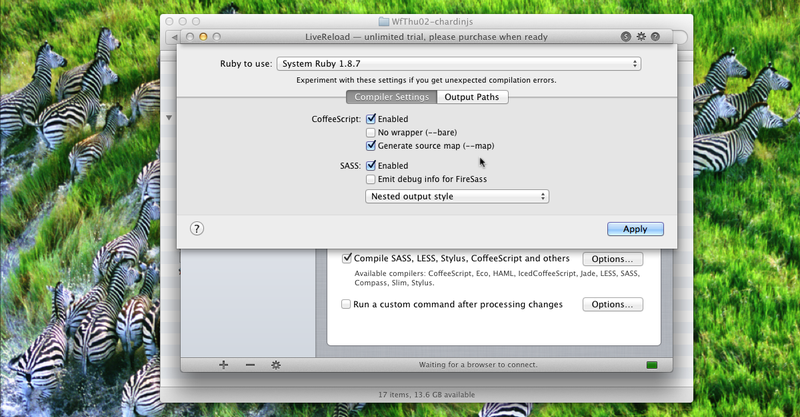 The next time we save a .coffee file, there is an additional .map file generated: 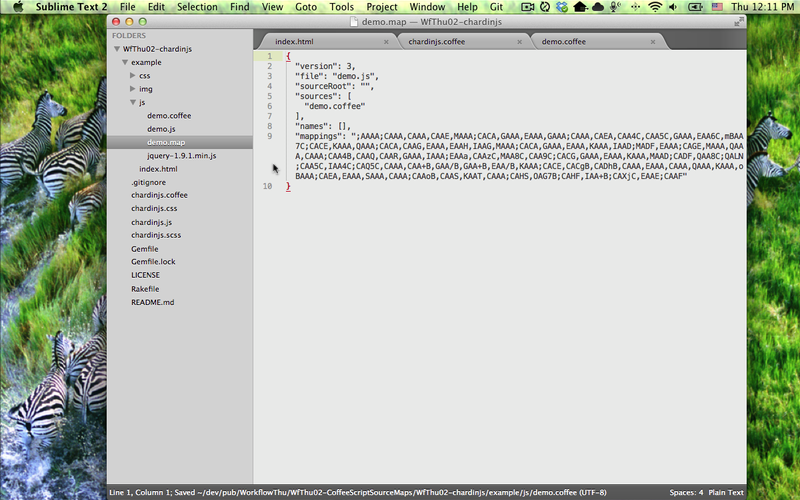 If you’re running a web app server like Rails, Django or Node.js, there is an additional step for you because you need to make sure that the map files and CoffeeScript source files are exposed to the web browser. Rails apps can use coffee-rails-source-maps gem, otherwise Google for your framework name plus “source maps”.

For most PHP apps and static designs files, however, the steps described above should be enough.

First: Source maps must be enabled in Chrome Dev Tools options. Click the gears button in the bottom-right corner and then enable the checkbox:

Second: You need a recent version of LiveReload; I have v2.3.26 here, which is available both on the Mac App Store and on the support web site.

Let’s now minify the library, but still keep the mapping to the original source lines.

We’ll be using Uglify version 2 for that, which I already have installed (it’s as simple as sudo npm install -g uglify-js as long as you have Node.js).

I’m going to set up LiveReload to run minification on every change. I don’t normally recommend that, but it’s appropriate for the demo. The syntax is uglifyjs source.js -o minified.js: 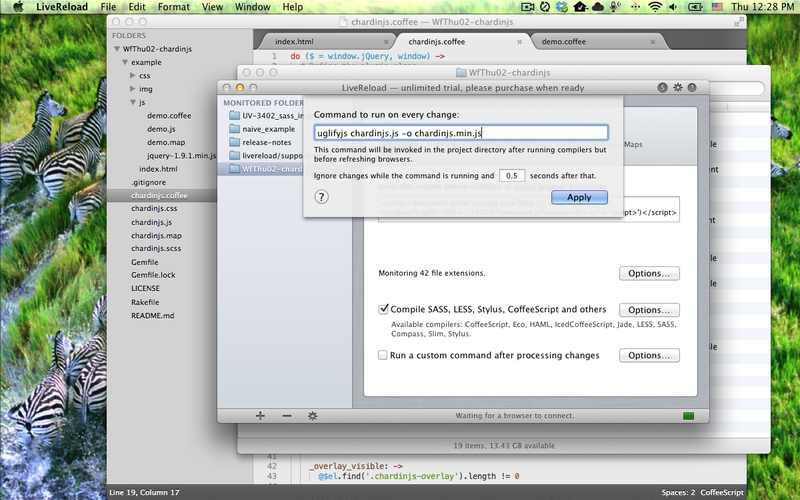 If we re-save the coffee file, we now get chardinjs.min.js. Let’s also fix index.html to include the minified file, and then reload Chrome:

Not very promising for debugging, is it? We can fix it, though, in two easy steps.

Let’s ask Uglify.js to generate a source map for us by adding --source-map chardinjs.min.js.map: 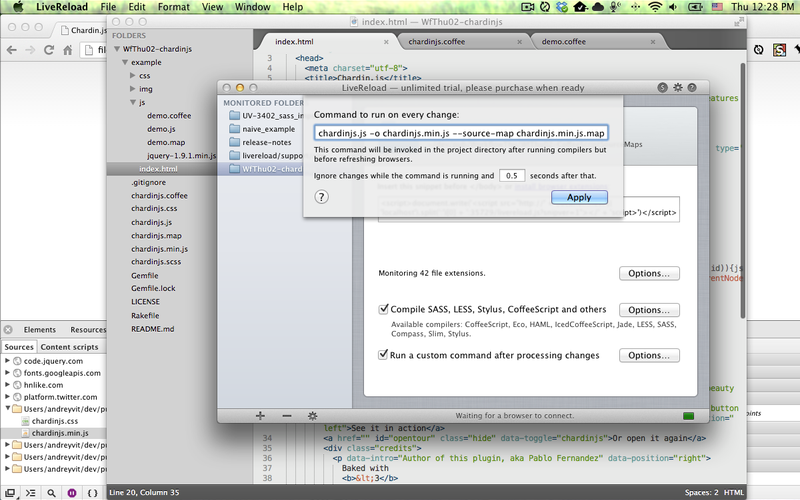 We see the unminified version, can set breakpoints and single-step. But we wanted to see CoffeeScript here, not JavaScript, right?

That’s the next step. Instead of giving Uglify.js an input JavaScript file, let’s give it an input source map (produced by LiveReload) instead: --in-source-map chardinjs.map: 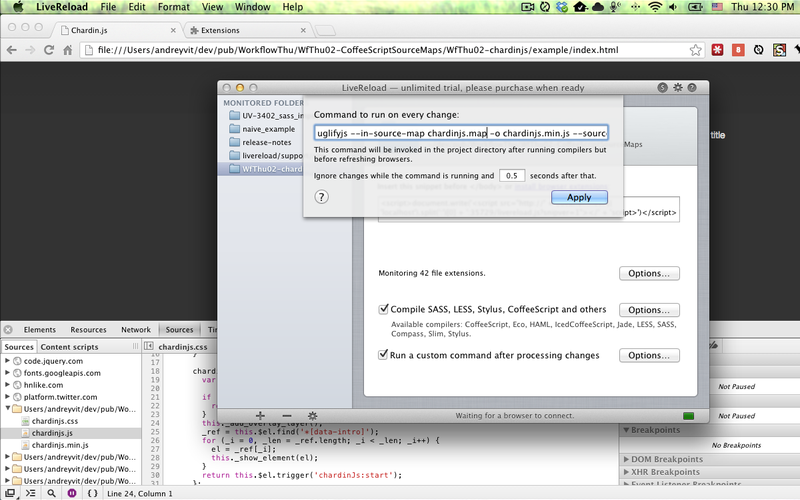 And here we get the holy grail of web development — a minified JavaScript file that can be debugged as if it was the original CoffeeScript:

So that’s source maps in CoffeeScript. Yes, you should be using them; it’s ridiculously easy, and you basically have no excuse.

If you’ve been waiting to try CoffeeScript, this is probably a good time to see if it clicks with you and your team. There are no semantic differences between JavaScript and CoffeeScript, so the choice is purely a matter of personal taste and aesthetic.

Now, the minification workflow we saw is a nice way to debug an occasional production issue. I still don’t think it’s a good idea to use minified files during development, at least not until all your target browsers support source maps. Right now only Google Chrome and WebKit Nightlies have the support; hopefully Firefox will join the bunch soon.

As I’ve mentioned, this series is resumed and will continue for a while. In the next installment, I’m going to show a ming-bogging images workflow involving Photoshop, Enigma64 and LiveReload.

Note: I promise there will be episodes that don’t feature LiveReload. :-) I will obviously mention my products often, but the series is focused on using hot / new / frequently-asked-about technologies in everyday work, and not on any specific products.